Preparing for the many holiday food distributions.
We are partnering with McLaren Lapeer Region to distribute 300 turkeys and food totes November 22nd.  Check out our Facebook page for more details

The Story of Stone Soup 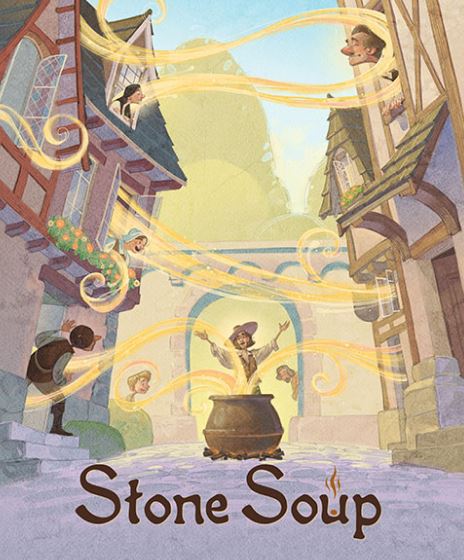 A kindly, old stranger was walking through the land when he came upon a village. As he entered, the villagers moved towards their homes locking doors and windows.
The stranger smiled and asked, why are you all so frightened. I am a simple traveler, looking for a soft place to stay for the night and a warm place for a meal.
"There's not a bite to eat in the whole province," he was told. "We are weak and our children are starving. Better keep moving on."
"Oh, I have everything I need," he said. "In fact, I was thinking of making some stone soup to share with all of you." He pulled an iron cauldron from his cloak, filled it with water, and began to build a fire under it.
Then, with great ceremony, he drew an ordinary-looking stone from a silken bag and dropped it into the water.
By now, hearing the rumor of food, most of the villagers had come out of their homes or watched from their windows. As the stranger sniffed the "broth" and licked his lips in anticipation, hunger began to overcome their fear.
"Ahh," the stranger said to himself rather loudly, "I do like a tasty stone soup. Of course, stone soup with cabbage -- that's hard to beat."
Soon a villager approached hesitantly, holding a small cabbage he'd retrieved from its hiding place, and added it to the pot.
"Wonderful!!" cried the stranger. "You know, I once had stone soup with cabbage and a bit of salt beef as well, and it was fit for a king."
The village butcher managed to find some salt beef . . . and so it went, through potatoes, onions, carrots, mushrooms, and so on, until there was indeed a delicious meal for everyone in the village to share.
The villager elder offered the stranger a great deal of money for the magic stone, but he refused to sell it and traveled on the next day.
As he left, the stranger came upon a group of village children standing near the road. He gave the silken bag containing the stone to the youngest child, whispering to the group, "It was not the stone, but the villagers that had performed the magic."

The moral is that by working together, with everyone contributing what they can, a greater good is achieved.